Mi Power Bank 10000mah Pro come in all shapes and sizes — from the more mundane to the more polished and sleek. The Mi Power Bank Pro easily falls into the latter category. Just over 5″ in length and just under 3″ wide, the power bank is just under ½” thick and features rounded sides along the length. The entire outer shell is a nice brushed aluminum with the Mi logo centered on the front in the lower quarter of the case. The back side has a small clear caution sticker and the mi.com URL in roughly the same spot. Each end of the power pack is your basic grey plastic finish, with the regulatory and input/output info printed on one end and your ports on the other. On the end with the ports, you’ll find an ovalish power check button on the far left, four LED lights to indicate current capacity, a USB Type-C port and a USB A port. You might be thinking “sweet, USB-C!” Unfortunately, the USB Type-C port is for input only and allows for faster recharging of the battery pack. The USB-A port, however, supposedly intelligently adjusts up to 18W but more on that later. 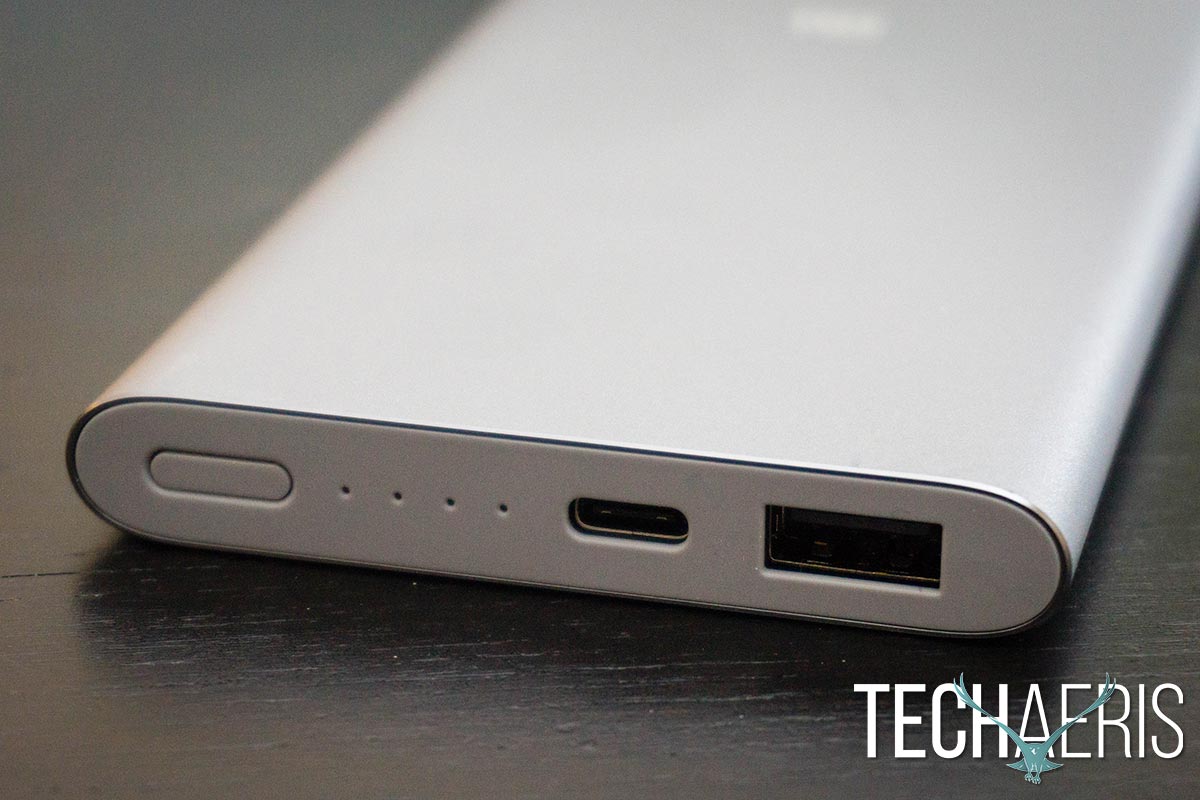 The power check button, LED lights, and ports on the one end.

Included with the power bank is a short, 11″, white USB-A to Micro-USB cable with a Micro-USB to USB Type-C adapter attached to the end.

As far as power banks go, the Mi Power Bank Pro is definitely sleek looking with its nice aluminum finish and is also very durable feeling.

The power bank is as easy to use as plugging in the USB-A cable and connecting it to your device. Once the power bank detects a connection, it will automatically start charging your device.

While the Mi Power Bank Pro only outputs over USB-A, the specs and manual state that it outputs at 5.0V/2.4A, 9.0V/2.0A, or 12V/1.5A — plenty of output for fast charging on devices that support it. Unfortunately, during testing with both the included and three other cables, the most we could get out of the power pack while charging the Pixel 2 XL was 4.65V/1.43A which wasn’t enough for the phone to display “charging rapidly.”

The key statement here is “USB PD not supported,” so that explains why it won’t fast charge Pixel phones. At any rate, as such, charging was still fairly quick with it’s roughly 6.65W output to the Pixel 2 XL. Other devices tested charged as expected as well, so aside from no rapid charging for Pixel phones, there aren’t any real complaints with performance here. It’d also be nice to see a future version support charging from the USB-C port as well.

Sporting a 10,000mAh Li-polymer high-capacity battery, you should be able to get close to, if not more than, three full charges of your device. During testing, we were able to fully charge the Pixel 2 XL twice and then up to 92% a third time from less than 15% each time. Where the Type-C port comes in is for recharging the battery pack itself. Normally it can take up to 6 hours to charge a battery of this size but over USB-C it took us just over 3.5 hours to fully recharge the battery pack.

There are no reviews yet.

Add to cart
Add to wishlist